Nestled at the southwest end of the abundant Annapolis Valley of Nova Scotia is an artist haven tucked off the beaten path, steeped in a history of boat building and dotted with centuries-old buildings, some perched on stilts. In a valley filled with creeks flowing down to a tidal river and surrounded by the Acadian wilderness is the community of Bear River, alive with the creativity and ingenuity of those who call it home. Add to this the seductive smell of freshly roasted coffee floating through the village and you’ve got the cornerstone to a good life.

After a fifteen year love affair with tree planting out west, Jonathan Welch found himself drawn back to the province where he grew up ready to turn his attention to other passions: namely following a connoisseur’s obsession with the perfect cup of coffee and a love for restoring old buildings. The old I.O.O.F hall in Bear River was on the market, just waiting for an entrepreneur with fresh ideas. Fronting the picturesque main street and backing onto the beautiful Harris Brook, Jon felt that this building would be the perfect setting to embark on his family’s new adventure: producing the finest fair trade organic coffee around while nurturing the visual and musical arts.

Jon and his partner Erin are among those who have made the choice to live rurally, recognizing the beauty of operating on a smaller scale and the rewards of knowing one’s neighbours well. By hosting and supporting local music and art events, they help bring culture to their community. They’re part of a new generation exploring old values of living with a little less, entertaining one’s self a little more and helping cultivate a good life in a small, rural community.

Of course, Jon and Erin know one of the keys to a good life is the luxury of a delicious, freshly roasted cup of coffee. Inspired by the coffee culture of BC, where you find micro-roasters in many small towns, Jon and Erin felt there was space in the Maritimes for another roaster offering premium Arabica fair trade organic coffee.

Coffee roasting is both art and science. Before the beans ever reach Canada there is an immense amount of hard work that goes into their cultivation, harvest and preparation for market from coffee producers around the world. As one of the most heavily traded commodities in the world, coffee producers have long been oppressed by inequality. The fair trade movement of the last few decades has worked hard to improve the quality of life for farmers, their families, communities, and the environment that surrounds them. Paying a fairer price for green beans effects everything from the quality of life for producers and their communities to the taste of the coffee in your cup. Our commitment to roasting you a superb cup of coffee is an expression of deep respect for our producers. It acknowledges that a bridge can exist between the rural economies of coffee farmers and those of rural Nova Scotia.

Once the beans have arrived at 1890 Clementsvale Rd, every bean in the batch is closely observed by eye, nose, hand and ear. It is not superlative to say there is an intimate relationship between roaster and beans; a simple but nuanced dance of sugars, acids, intuition and experimentation.

Inspired by the wildness of the rugged Acadian coastline and forests, the incredible power of the Bay of Fundy and the reminder of constant change that comes with living on a tidal river, a business name was chosen that would reflect this unique corner of the world. The name Sissiboo, said to be an Acadian word meaning “six owls”, refers to a local river system that borders on one of the largest wilderness areas in eastern Canada—an area rich with rivers and lakes and a favorite outdoor destination for their family.

A note on our packaging:

Our packaging has been a truly collaborative effort amongst friends. We owe great thanks to Tia McLennan for the gorgeous lino-cut prints that now adorn them. Tia has been studying and practicing art for over ten years. She has a penchant for printmaking, poetry and gardening, especially garlic. She currently resides in St. John’s NL and loves her morning coffee.

Anna Comfort, renaissance woman, took these prints and brilliantly placed them on the bags. Thanks Anna!

Dave Ron provided us with our original Sissiboo logo and we love it. Thanks Dave!

Dan Froese designed our website, shot all the photography and has become our designer on retainer. To say he has a good eye is an understatement. He sees in a way few do. Thanks Dan! 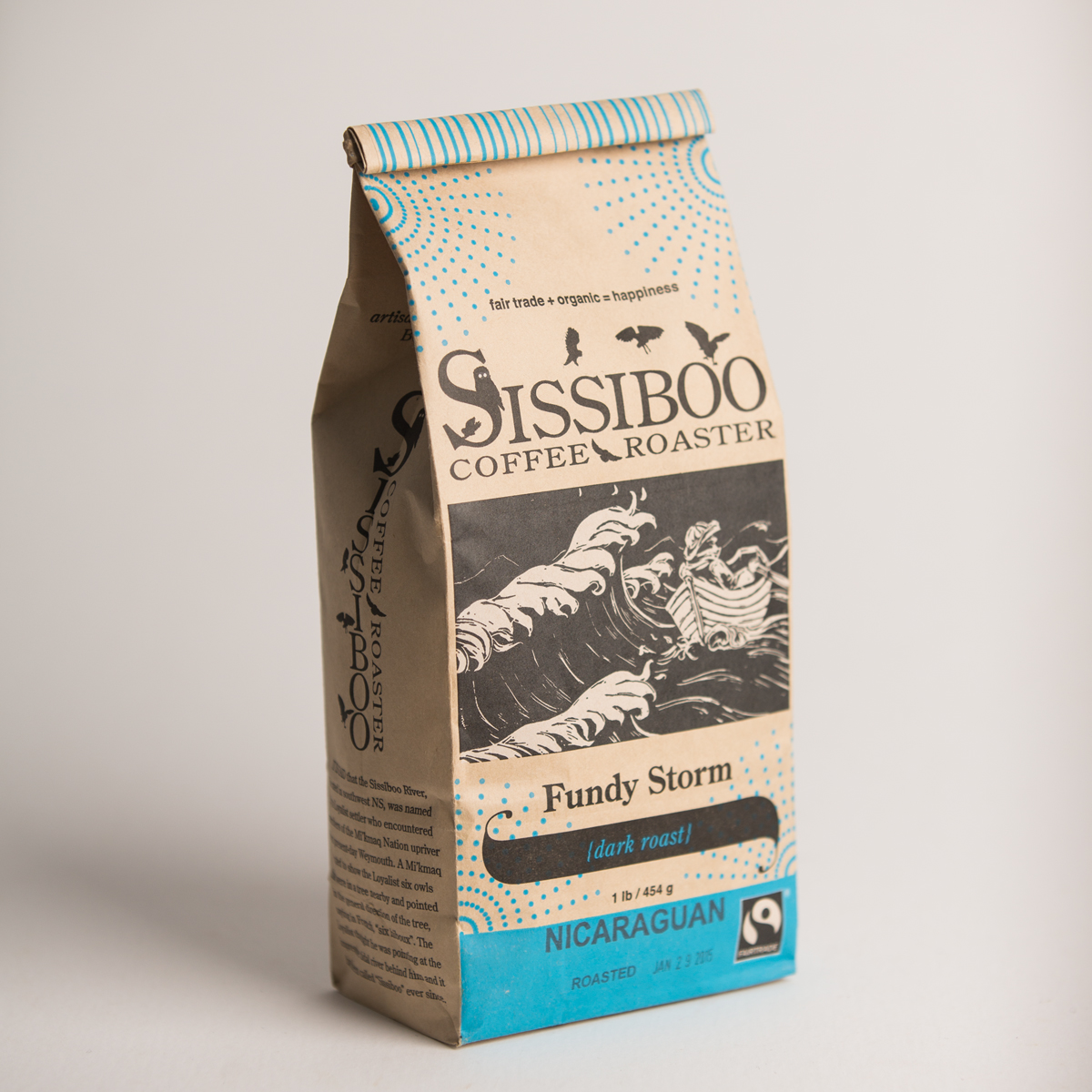